If I had done PR for Cory Aquino 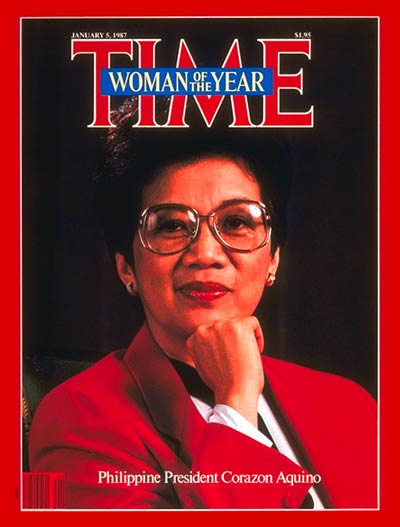 I was still a student back when Corazon ‘Cory’ Cojuangco Aquino was sworn in as president of the Republic of the Philippines, after the world’s first bloodless revolt against the dictatorial regime of Ferdinand Marcos. Admittedly, Cory Aquino might not have seemed the wisest choice but was indeed the strongest emotional choice for Filipinos who got sick and tired of the Marcoses and their allies and cronies who not only took away basic rights and freedoms of the citizenry, but also plundered the country of hard-earned taxpayers’ money.

Source: http://nmagz.wordpress.com By 1987, I had begun my career as a journalist. Prior to this, I may not have thought of being one due to the strict censorship of Filipino media by the Marcos machinery – not only from the pertinent government authority handling the media, but also from the police and military. As such, for the restoration of the freedom of expression and the media alone, I am already grateful to Mrs. Aquino because having moved to PR a year ago, my foundation as a journalist has quite a lot to do with it.

Because I worked for a foreign media news bureau (a Japanese TV agency), I was immediately thrust into covering issues of international significance, and among them was the presidential beat. Thus, although I never had the chance to exclusively interview Mrs. Aquino, I did have the chance and the privilege to see her face-to-face and witness first-hand how, in spite of her being an inexperienced politician, she relied on her courage, dedication, commitment, sincerity, honesty and credibility to withstand all the challenges of being president of a republic still very much fragmented due to the turbulent years of martial rule under the Marcos administration.

So, if I were not a journalist then and was immediately tasked to do PR for Cory Aquino, what could I have done? Well, firstly, trying to get media attention would definitely be amongst the least of my concerns. Pitching for interviews would be unnecessary and almost nil. And getting her in the front pages or covers of every daily or magazine, both local and international, could be done with the least amount of effort.

The real problem would actually have been how to contain all the media outfits, both local and international, wanting to get exclusive interviews. In short, it would be more of a problem of selecting, and to a certain extent, discriminating against media outfits who may not necessarily serve the purpose of getting her messages across to the wider audience. After all, she may not necessarily have all the time in the world to accommodate all interview requests as she did have an entire nation to run.

Key messages? Well, Cory Aquino herself. The decision and the act she made to run against Ferdinand Marcos is already in itself the key message that was unavoidably built-in to her personality – which is that of the restoration of democracy and all the rights, freedoms and privileges that every citizen of a democratic republic should have. Together with her pronouncements that her role was simply to serve as transition president from a dictatorship to that of a newly-restored democracy, it would be ill-advised for anyone to suddenly turn her into a statesman of the likes of Kennedy or Churchill.

On the one hand, the actual day-to-day tasks of running the country and all other decision-making processes rested on the cabinet and other executive officials who are expected to provide her with the wisest advice that they could possibly provide. In the end, after hearing and heeding all the advice, when Cory Aquino makes an announcement the only task would be for her to portray herself as having made such a decision with the same amount of sincerity and honesty in believing that this is the decision she thinks is best for the nation. The rest of the task would be to disseminate such information (which again would not exactly be a problem as every local and international news agency would be asking for it – the main task really is being logistically prepared to face such demands) and provide for opportunities for the appropriate officials to do the explaining about the decision. Going into details of any decision simply no longer falls under the office she represents.

As far as crisis communications and issues management is concerned, well, it is also widely known that Cory Aquino’s term as president was marked with several coup attempts (seven to be exact) that were all meant to remove her from the presidency. Thus, having the Office of the President as a client may have its very distinct disadvantages and advantages. First is that it would always be the primary target for any criticism, unrest or rebellion, but at the same time also possess a distinct PR machinery that involves having a duly appointed spokesperson as well as all the top executive, police and military officials at your disposal.

Therefore, in such a situation, one simply has to make sure that as the president addresses the public (which should be done in a swift yet well-calculated manner so as not to create any doubts as to whether the seat of power has been taken over) regarding her being in control and on top of the situation, such a statement must be well coordinated with all pertinent authorities (especially national security, defence, police, military, the legislative and the judiciary) stating and conveying a consistent key message that the chain-of-command is intact and that such officials must be constantly seen and heard in public (especially the broadcast media such as TV and radio) conveying such message. This is apparently the reason why during such coup attempts, broadcast and print media entities were amongst the primary targets of ‘rebels’ due to the importance and significance of communication during an eventuality.

In terms of preparing her for any press conference or scrutiny of a very free and inquisitive media, I can only guess that the only advice I would probably give her is to be herself – sincere, unpretentious, honest, yet a bit cautious especially on issues that involve national security. And despite her inexperience as a politician and public servant, she did surprise a lot of people with the intelligence and frankness she displayed in handling even difficult situations and questions from the media. Therefore, there was really nothing much to advise her as she somehow knew how not to get herself into trouble – in her own frank and honest yet very tactful way. She may not have necessarily undergone any media training but her sincerity, honesty and credibility, combined with her confidence and intelligence and popular support, provided her enough leeway to get away from tough situations.

In a nutshell, image-building could very well be the least of her PR concerns. But as in any other public office, responsiveness in a quick yet calculated manner is what counts the most. The more important PR task is to project the image that the Office of the President is very much in control, aware of and is in fact doing something about any situation that involves national interest. Beyond that, it would simply mean six years of consistently being able to logistically cope with the demand for information from the media and the public.

Of course, these are all hypothetical as Cory Aquino, the erstwhile ordinary housewife, widow and non-politician was finally laid to rest after more than a year of battle with colon cancer. And even in death, her positive image as a self-sacrificing citizen, dutiful mother and former president who was responsible for the restoration of freedom and democracy in the Philippines, was not a by-product of good PR but of a life well lived.