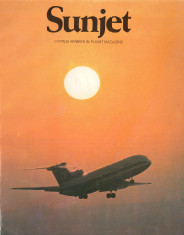 By Zoe Christodoulides When the recent closure of Cyprus Airways was announced at the start of this year, different emotions ran rife among the general public. For many, it was the inevitable pang of sadness that our national carrier would no longer be soaring high in the sky, characterised by that instantly recognisable flying Cyprus mouflon that we have grown to associate with so many of our trips abroad, whether for business, pleasure or studies. For others, it was a flood of memories of their first family holidays, either into the island or perhaps visiting relatives abroad, often accompanied by the infamous Cypriot suitcase packed full of village halloumi cheese. For those working for the airline, it was the sad loss of jobs that obviously hit the hardest note of all. As the last editor of the Cyprus Airways in-flight magazines, I felt my own angst during the Christmas holidays, wondering if the magazines our team had worked hard to put together since last October would ever grace the planes for another season. Unfortunately, they never made it beyond the printers. And although no one has a copy of the latest issue of Sunjet in their hands, we would still like to give readers the chance to have a look through the very last issue of the publication, by posting a link to the magazine flipbook. Here at Action Global Communications in Cyprus, our Publishing team has worked hard for over 40 years to give passengers on the Cyprus Airways planes something to enjoy on their journey; always aimed at being both highly informative and entertaining. After all, before TV screens ever existed on aeroplanes – and well before tablets, smart phones or laptops were the norm – passengers relied on reaching into the airplane pocket in front of them to pass their time on board. And even to this day, despite the varying other means of in-flight entertainment, countless readers would write to thank us for filling them in on all sorts of places and things to do on the island that they may never have otherwise known about. More than that, we stand extremely proud of the fact that before the closure of the airline, the up-to date glossy was not only the oldest publication in Cyprus still in circulation, but also one of the oldest established in-flight publications in the whole of Europe. It all began in the early 1970s, not many years after the launch of what stands as today’s longest running inflight magazine, KLM’s Holland Herald. Initially produced twice a year, it fast became a quarterly that Cyprus Airways passengers looked forward to reading each and every season. In the late 1980s, an American survey hailed Sunjet as the 6th top in-flight magazine in the world. In the 90s, Sunjet even went on to be named the world’s top in-flight magazine alongside Air New Zealand’s KiaOra magazine by the UK’s Mail on Sunday. Founding editor and publisher of Sunjet, Tony Christodoulou says: “It’s a terrible shame that what was the oldest magazine in Cyprus still in circulation will no longer be produced. For over 41 years, it has been dedicated to promoting the country to millions of tourists who have travelled on Cyprus Airways ever since the publication of the first issue just before the Turkish invasion of 1974. From food and drink on the island, to out of the way villages and beaches, Sunjet became a bible for any tourist wanting to delve into what the country has to offer. ” Relying on professional and enthusiastic reporters, editors and photographers, the Action team worked hard over the decades to inspire, entertain and inform readers with features and images highlighting the many delights of a country that attracts thousands of holidaymakers each year. With this opportunity, we would like to warmly thank all our contributors over the years for their excellent work, as well as the dedication of previous editors, namely Dina Wilde (editor for over 30 years) and Sean Chrysanthou. We hope that you enjoy reading this last issue of a very special Sunjet as much as we enjoyed putting it all together. http://www.actionprgroup.com/flipbooks/NEW-FLIPBOOKS/sunjetjanuary2015/index.html